For many of us, California immediately triggers the iconic Hollywood Sign, Silicon Valley, and the Golden Gate Bridge. Along with these, California is also known for its unique natural attractions, beaches, delectable cuisine, wine culture, pleasant weather, glitzy and vibrant cities. The Golden State of California is blessed with spectacular landscapes and is one of the most geographically diverse states. Whether you are planning an adventurous trip or looking forward to a laid-back holiday, you can’t go wrong with California. With a rich history, amazing art scene, endless entertainment options, and a coastline stretching 840 miles, California has got something to offer to everyone. But before you go deep into exploring this beautiful place,

You need to check out these famous landmarks in California.

The Golden Gate Bridge in San Francisco is one of the most famous landmarks in California that attracts more than 10 million visitors from all across the world. This 1.7-mile suspension bridge spanning the Golden Gate strait connects the city of San Francisco to Marin County. It is considered an engineering marvel, and the international orange coating of the bridge makes it visible even when the fog engulfs the area. Walk or bike across the bridge in the evening and admire the beautiful sunset views of the skyline. Take a guided tour and learn about its history or shop for souvenirs at the Bridge’s Welcome Center. 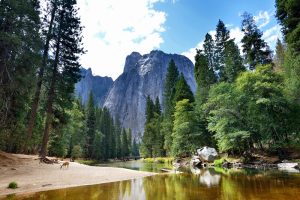 Yosemite National Park in Northern California, one of the United States’s most scenic national parks, is a treasure trove of natural wonders. Situated within the Sierra Nevada Mountains, Yosemite National Park is home to spectacular mountains, meadows, valleys, rivers, waterfalls, and unique granite formations. Some of these attractions (such as Yosemite Valley, Half Dome, El Capitan, Yosemite Falls) are renowned landmarks in California. It is also among the top rock-climbing destinations in the world. The best way to explore the park is to follow the hiking trails that range from easy walks to difficult and dangerous trails.

Set up high in the Hollywood Hills in Los Angeles, the Hollywood Sign is one of the most
photographed icons as well as the most famous landmark in California. Often regarded as a symbol of the American film industry, it is no longer a mere nine-letter sign measuring 45 feet in height and 350 feet in length. Originally built to advertise a local real estate business, this sign in Los Angeles (the base of the Hollywood entertainment industry) has soon become a metaphor for dreams and ambitions of success and fame in the glitzy world of cinemas. As it is illegal to go near the sign, the closest point one is allowed to reach can be accessed by hiking within Griffith Park. You’ll also catch panoramic views of the Los Angeles cityscape from here. 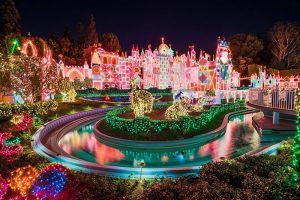 Disneyland touted as the happiest place on Earth, is California’s best amusement park, and the only Disneyland that was designed and built under the direct supervision of Walt Disney. Located in Anaheim, this original Disneyland (that can be found in only five other places across the world) is surely a notable landmark in California. Disneyland, a bundle of entertainment, is always an enchanting place for kids as they get to meet their favorite Disney characters. It brings immense joy and excitement to everyone, irrespective of which age group they belong to. With its themed lands, vintage rides, breathtaking attractions, thrilling shows, world-class hotels, and restaurants, it makes a family vacation complete.

Despite its forbidding name, Death Valley National Park is one of the most famous landmarks, a mix of extreme landscapes. Known as the hottest, driest, and lowest area in North America, more than 90% of this park is a designated wilderness area featuring colorful badlands, sand dunes, below-sea-level salt flats, rugged canyons, snow-capped mountains, spring-fed oases, carpets of wildflowers, etc. It is also home to a variety of wildlife that can sustain Death Valley’s harsh environmental conditions. Death Valley National Park is a popular winter destination among locals. Book your flights with Indian Eagle and visit these amazing landmarks in California.

Top Popular Types Of Medicine Of 2020

Should Voluntary Class Options Be Implemented In Schools Amidst COVID 19?

The Most Popular Gemstones for Bridal Jewelry

Benefits Of Hiring Movers And Packers While Relocating In Solan

Find Out The Benefits & Procedure Of Teeth Whitening